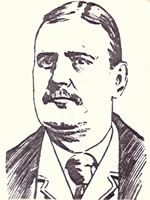 Two (2) days before his death, in the early morning hours, Officer Heffernan assisted Corporal Louis Whitman who had detained two (2) suspected burglars at 21st & Rowan Streets in the Portland neighborhood.

During questioning of the two (2) men, one of them produced a handgun and shot at Corporal Whitman. However, before the shooter could take accurate aim, Officer Heffernan knocked him to the ground causing the shot to miss Whitman. Immediately after this, the second burglar produced a pistol and began shooting at Officer Heffernan as Heffernan fired back with his pistol. The wounded man then fled.

The man on the ground, still holding his pistol, was told by Officer Heffernan that he was under arrest. The man then shot Heffernan in the side, penetrating his liver and lung. Officer Heffernan was rushed to Saint Joseph's Infirmary, where he lingered for two (2) days and died as a result of his wounds.

Officer Heffernan is survived by his wife and son.