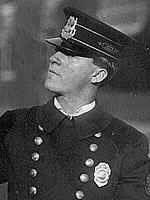 Mounted Patrolman John Fow was shot at 6pm at a grocery store at 1468 Bland Street on Saturday, February 17, 1917. He was responding to a complaint from two (2) boys that were delivering meat to the store that two (2) other boys were throwing rocks at them. He went inside of the store and a man identified as Tom Harrison, the step-father of one of the boys that was supposedly throwing the rocks, asked Fow what the trouble was. A struggle ensued, Harrison stepped back, pulled out a gun and fired two (2) shots, one hitting Fow in the chest on his left side and one hitting his right arm. "I am paralyzed," said Fow. "Tell the police to come and get me," he said to Mr. Newell, the owner of the grocery store. Harrison fled and Fow sank into unconsciousness.

Officer Fow died at 2:28 am on Sunday, February 18, 1917. Death was from hemorrhages of the left lung. Although the gunman was identified as Tom Harrison. Following the murder of Patrolman Fow, it is rumored that Tom Harrison would visit Louisville occasionally in a disguise. In June 1927, the suspect was identified by two (2) Louisville Division of Police homicide detectives through mugshots after he was arrested by police in Birmingham, Alabama. The suspect was extradited back to Louisville to stand trial.

Patrolman Fow had been with the agency for six (6) years. He is survived by his wife and parents.